MAnE™ v4.0, the Mission Analysis Environment for Electric Propulsion, is the low-thrust counterpart of MANE™ v3.5. It is a system of software tools, seamlessly integrated within a graphical user interface, to support the analysis and optimization of multiple leg, heliocentric missions which employ electric propulsion as the principal mode of thrusting. Full optimization of missions with up to 14 distinct legs is supported. The calculus of variations is the optimization method employed.

The trajectory optimization component of MAnE v4.0 is HILTOP™, whose heritage spans five decades. HILTOP was employed in numerous NASA and industry studies of missions to all the planets and to many comets and asteroids in different mission opportunities. HILTOP has been validated by direct comparison of results with other industry software and has been employed by the developer in various New Frontiers and Discovery class mission proposal developments. Experiences gained with these exercises were used to refine the product to perform more effectively and efficiently in typical situations encountered by a mission analyst.

MAnE v4.0 began in 2004 as an effort to re-develop and update HILTOP using modern development tools and to add the graphical user interface. The first fully operational system that includes all components, documentation and example cases was released in September 2017, following extensive testing over a wide variety of missions. The most recent release of the software, which includes numerous upgrades and extensive testing, was released in January 2021.

SpaceFlightSolutions™ places high priority on the integrity and usability of its software products. Numerous data dependent internal tests are performed during operation to monitor validity of results being calculated and messages are logged of all significant events encountered as a record for subsequent evaluation. Additionally, program options are provided that allow the user to test the optimality of the converged results. A variety of documentation features at the field, form and concept levels are provided to support the learning process for becoming productive in the use of MAnE v4.0.

Licensing of MAnE v4.0 is required for each individual workstation on which the application is to be executed. Licenses are perpetual and include one year of support and version upgrades that are released during that time. Continuation of support is available via annual subscriptions. Contact SpaceFlightSolutions for current licensing and support fees for MAnE v4.0.

™SpaceFlightSolutions, MAnE and HILTOP are trademarks of Jerry L. Horsewood

The MAnE v4.0 GUI provides a common framework within which the many components of the environment are integrated. The framework provides an organized presentation of the input required for a given environment component and a convenient method to execute the component and retrieve the relevant results. This visual approach enhances understanding of the component and of the problem being addressed and significantly reduces instances of missing or erroneous inputs.

When MAnE v4.0 is started, mission input data from the most recently executed case populates the input forms of the GUI. The initial form displayed is known as the Mission Overview form, an example of which is shown below. This form displays the itinerary of the mission as presently defined. Targets in the itinerary may be added, removed or changed. The icons in the target ribbon are active and are used to specify the target of interest at a given node. The option buttons at the top permit the selection of models to be used for evaluating trajectories; the choices made here affect the content and display of data of subsequent forms; that is, data items that become inapplicable for certain models are either hidden or deactivated to aid the analyst in the efficient use of MAnE v4.0. To assist new users, the purpose of each active control on all forms are described in a tooltip that is displayed when the mouse hovers over the control.

Several artifacts of the above form are common to all of the data entry forms. These include the bar menu at the top, the boundary value problem counts for the problem as currently defined, the toolbox of green, grey, blue and red buttons on the right, and the tabs along the lower border. The bar menu and sub-menu items provide access to all supporting applications, database editors, graphics features, data reports, documentation and help files. With few exceptions, accessing any of these features results in the display of an additional form with its own set of controls and data. The toolbox provides quick access to the most frequently used applications and functions, which are also accessible from the bar menu. The tabs provide a mechanism for categorizing input parameters into meaningful sub-groups. By processing the tabs from left to right, one is assured that the adaptive forms properly reflect the effects of choices and decisions made on prior forms.

The group of green icons in the toolbox are used to quickly access support applications frequently used while performing mission studies. From the top, the first three applications evaluate Alignments, Closest approaches, and Nodal crossings of any two bodies that occur within a specified time interval. Next is an application that converts between calendar and Julian Dates, and the final icon in the group is the Lambda Lab, an application that allows one to vary the values of the independent variables and immediately observe the effects on the trajectory profile. It is a powerful tool for improving initial estimates of independent variables to initiate the solution to the boundary value problem.

The single grey icon is used to access the feature to Draw the orbits and trajectories of one or more missions, to annotate the drawing with text and arrows, and to save the drawings in various formats.

Additional features are available from the menus. These include transferring and receiving mission solutions developed on other computers that host MAnE v4.0, interrogating ephemerides and displaying tabular and graphical results, searching for near encounters of small bodies along a trajectory, appending trajectory segments to extend a mission, documentation at the form and application levels, output report descriptions, analysis guidance and troubleshooting tips, and example cases.

The trajectory optimization program HILTOP is based upon the zero sphere of influence patched conic model of the solar system; that is, heliocentric trajectories are computed under the assumption that the sun is the only attracting body. Once the terminal heliocentric velocities are known, the velocities relative to the terminal body are evaluated and equated to planetocentric conditions at infinity. This method is alternatively referred to as “matched asymptotes”. It is generally regarded as sufficiently accurate for purposes of preliminary mission analysis and for propulsion system sizing and selection. This model is virtually identical to that employed in MAnE v3.5.

Trajectory optimization is achieved with the indirect techniques of the Calculus of Variations. While the solution to the boundary value problem that results with this approach is considered by many to be overly difficult, the robust iterator that is used in the program, combined with the innovative tools incorporated in MAnE v4.0 substantially reduces the severity of the problem. Advantages of indirect techniques are that convergence tends to be quadratic in the neighborhood of the solution and that convergence assures that the solution is locally stationary. Additionally, indirect methods permit identifying far more detailed optimal thruster operational conditions than direct methods that are currently available.

The ultimate boundary value problem to be solved is comprised of an equal number of independent variables and end conditions. The end conditions are, in turn, comprised of the constraints that are specified for the problem and the applicable natural boundary, or optimality, conditions for the problem posed. The natural boundary conditions are automatically formulated within HILTOP so that the user need not be concerned with specifying those that apply. This is but one of the many user-friendly features encoded in HILTOP to significantly reduce the learning curve for productive use. For those users that become more proficient with the programs use, provisions exist to override the internally selected natural boundary conditions.

A typical mission analysis involves functionality beyond the realm of trajectory optimization and this additional functionality is provided with several supporting application programs that are delivered as a part of MAnE v4.0. Specific support tools that are presently included are:

MAnE v4.0 includes a general purpose orbit and trajectory profile drawing feature that is employed in several applications. Here are a few examples:

– Display while optimizing a trajectory.

– Within MAnE v4.0, many of the standard reports are automatically opened in MS Office Excel. This makes available all the graphics features of the spreadsheet program for use with the data in the report. Following is an example of a graph of propulsions system parameters as a function of time for a mission to Mars. 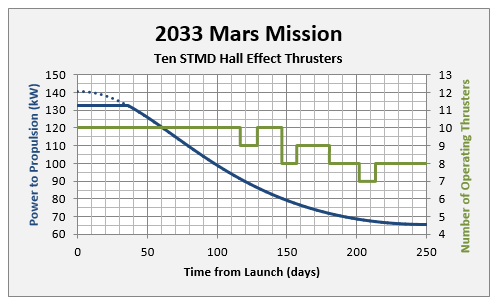 Documentation of MAnE v4.0 is provided electronically in a variety of formats and is installed on your hard disk along with the software.

MAnE v4.0 is developed and tested for operation under Windows 7 and Windows 10. A minimum of 2 GB of free disk space is recommended. Performance of the application is strongly impacted by the amount of memory and processor speed, especially during the trajectory optimization function. Minimum memory requirement is 8 GB, but 16 or more is recommended. A minimum processor speed of 2 Ghz is needed for minimal performance, but 3 Ghz or greater will yield a more satisfying response.

We appreciate your visit to SpaceFlightSolutions and we invite you to contact us if you have any questions or if you’re ready to get started.